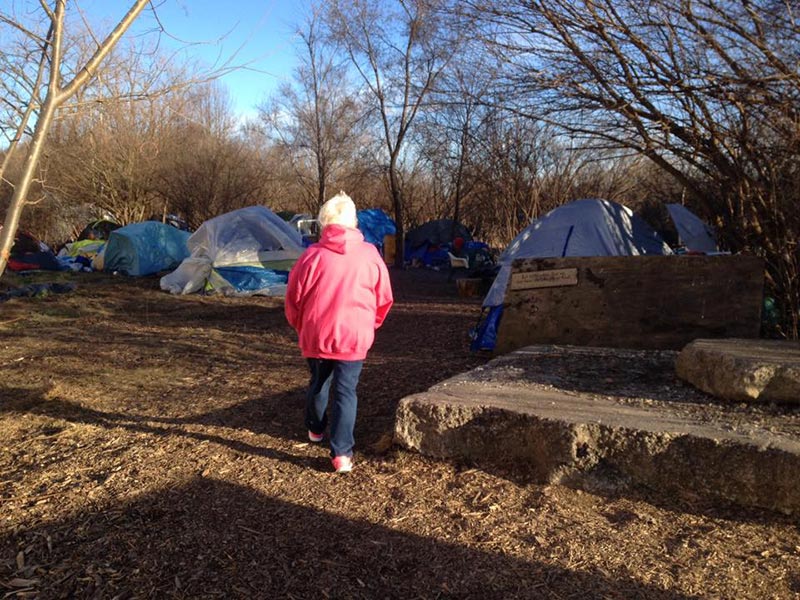 We have so much to be thankful for 2017! What an amazing year it has been for Meet Me Under The Bridge Inc.  There have been some challenges as well and some heartbreak as some of our friends from our outreach have gone on to be with The Lord. They will be sorely missed and our lives are richer because of them.

Dave passed away November 4th, that’s one that hits home for me. Dave used to live in a tent on the river and we had served him for 6 years and he was my friend. Dave asked John (his camp mate) if he felt the lightening that hit close to their tents the night before. John told him he didn’t feel anything. John and I went to put trash in the dumpster and I was telling John about my brother that was struck by lightning at 17 years old and died. Dave overheard us and said, “I went to high school with a guy that was struck by lightning.” I asked what his name was, he said, “Jerry Albright”. I started to cry and realized this was a divine appointment. Yes, my brother was Jerry Albright and a homeless guy we had been ministering to had gone to high school with my brother. We never know who we are ministering to. It’s someone’s child, grandchild, father, mother, sister, brother. All have value and All matter to us.

Then there is Peggy. She was always a ray of sunshine! She was kind to everyone and generous with her love. She was a friend. She was brutally murdered by another homeless person with mental illness. This indeed is a hard pill to swallow. We pray for the accused because he was our friend as well.

Oh yes and there was Richard. What a hoot! He was also a friend to this ministry. He hadn’t come down for a while to have lunch with us, so I stopped by his apartment to see if he was ok. He was confined to a wheelchair as he had been born without legs. He looked tired and he wasn’t feeling real good. We helped where we could with him. He did come by after about a month just once. Then we didn’t see him again. I’d asked the key volunteers to please send him a note of encouragement. About a month later, one of the notes came back and said “deceased” on the letter. Please let me tell you a story… Richard died Sept. 26th of this year and I NEVER look at the obituaries and something told me (Holy Spirit did) to look at the obits this particular morning. Richard died almost 2 months before and there hadn’t been a funeral yet, until 11-21-17. I contacted the funeral director this particular morning, told him who I was and asked what this Richard Moore looked like. The kid told me that they had already processed him and he didn’t get to see him. Honestly I wasn’t sure if there had been a service or not. The funeral guy told me that Richard had NO family and that he’d been homeless. Ding, ding, ding. It’s our Richard. I contacted our volunteers and hoped they could come on short notice. Three of us were able to attend. It was an amazing service. One thing that made my heart sing is that his pastor and the elder there at his church knew all about Meet Me Under The Bridge. Richard told them that he considered our gathering on Sundays, HIS CHURCH!! The Elder told us that Richard would take the bus, sometimes 2 buses to come to our gatherings. We loved that guy. He was a part of our FAMILY! Just like all of our friends that come on Sundays.

And my dear cousin Becky Heldman, The “Cake Lady”. Her mom and my mom were sisters close in age and they were pregnant at the same time. Becky and I were 4 days apart. We were like twins. Becky wasn’t homeless but she worked tirelessly every week for several years to make 3 cakes and 150 PB & jelly sandwiches (her great niece and nephew helped with these). My heart and soul ache to be without her.

Like I said… we miss them and our lives are richer because of them. They were our family and we cared deeply for them as we do all our guests.

The building is coming along nicely. Thank God for cousins and friends that has helped to make it happen and for “owning” the vision of what God birthed in me 12 years ago.
We now have two showers, a washer and dryer and a kitchen (how nice to finally have the microwave and the coffee maker in the kitchen and not in the supply room). We have had several of our friends that we minister to be able to do laundry and take showers.

Have you ever been so dirty that you couldn’t wait to get home and take a shower??? Yes, it was like that for them. Krissy said she hadn’t had a shower in 2 months. They were very appreciative. We take so much for granted. Thank God daily for a hot shower, AC/Heat, running water, washer and dryers at home, and a real bed to sleep in, as some don’t have much.

Paul Ramsey (a true servant of the Lord and key volunteer) is going to have Celebrate Recovery at the building. Which is Christian based for addictions and also to further someone’s walk with Jesus.

The weather is changing fast and it’s getting really cold out there. We have been taking coats, scarves, hats, gloves to our outreach. I just KNOW that folks were not prepared for the drop in temperature.

Our friends sometimes will throw coats away when it gets warm. I mean… where are they going to keep them for the summer??? I mean really? I’ve seen several mentally ill folks wear their winter coats in 90+ degrees in the summer. They don’t have a closet to leave them in, right? I’m hoping to get them to bring to the building so we can wash them for next year. If anybody knows me… they know I LOVE to REPURPOSE!! Just ask Mike and Chris that have been working diligently at the building. They had tried to throw away little pieces of drywall, wood and plywood. I just knew there was SOME life still in them. So I stared saving them in a box. Sure enough… the pieces were used. They probably think I’m a whack job for being so thrifty, but I know our donors appreciate our thriftiness.

We bring church outside 4 walls to a community who may not feel comfortable or accepted going into a building. We do more than just have church and serve a nutritious meal. We take it from “the seats to the streets.”

• Motel rooms for women that are being abused
• Ministry donated $ for funerals and bought flowers for funeral
• Bus tickets to get home
• Motel room for 3 days for someone that has to have a colonoscopy. If you’ve ever had one, can you imagine trying to “Prep” living in a tent?
• Paid rent for folks that are working til they can get their paycheck
• Gave away trucks and cars
• Hospital and Hospice visits
• Jail visits
• Transport to and from doctors’ appointments and chemo and hospitals
• Rides to airport and bus stations
• Gone to court on their behalf.
• Barbara was hit by a car doing 50 miles an hour. She arrived at hospital as a Jane Doe (didn’t have ID). We found out where she was and we were there daily, ministering to her. Once she was out of rehab, we paid for her apartment for a couple of months until she got her SSI checks coming in.
• We had a group coming and helping us and one of the leaders was crying, I asked what was wrong. He said that MMUTB not only ministers to the homeless but also to the volunteers. Reggie, Frank, Susan, Danny, Elaine, Jeffrey, Denis and Juan, James, Dave Wick
• Will was living under a bridge and donated money to the ministry. He said to me, “aren’t we to tithe to our church?”
• Moving women and their children from “safe houses” to other cities for their safety.
• Then there was Judy. Cathy a volunteer, found out she had a degree and helped her get on her meds and get a job making $45,000 a year. Judy would pinch herself every day. As long as she was on her meds she did great. Her boyfriend moved out and she became severely depressed. Cathy and I went to her apartment; she had 3 cats and hadn’t cleaned the cat boxes out in weeks. It was really, really bad. The cats had gone to the bathroom everywhere. We cleaned it up for her.
• Reggie had stage 4 colon cancer; his stomach was so distended that he couldn’t see his opening to put his colostomy bag on. We are not nurses, but you do what’s in front of you to SERVE another human being.
• Furniture for folks that do get apartments
• We have so many people that we have served over the years and some come back and help us serve, as they don’t want to forget where they have come from.Gave a guy a gift card to Hardees, he looked at it and said, what do I do with this? He had no idea that he could get food for it. A volunteer took him there and helped him.
• Johnny used to be homeless and we’d ministered to him during his addiction for several years. He is clean and sober and living in an apartment and doing so well. We are very proud of him.
• Volunteers take homeless that get SSI and help them find apartments, furniture and teach them how to manage their money.
• Once they get housed we don’t drop the ball, we still disciple them.

Please pray for our homeless friends. Pray for us as well as we are in the enemy’s camp and he doesn’t like us. Pray for God to change hearts and minds.

If you feel led and need a tax write off for the end of the year, we are a bona fide, certified non-profit organization that can give you a tax write off. You can also sign up for United Way with your work. At the bottom of the charity list, there is a section for “Other”. Please include our name Meet Me Under The Bridge to be your charity of choice. Ministry is expensive. We are so honored to be able to be the Hands and Feet of Christ to a community of people that society has rejected. Matthew 5:3 “Blessed are the poor in spirit, for theirs is the kingdom of heaven.”

Please give us the tools we need to fulfill: Thy Kingdom Come Thy will be done on earth as it is in heaven. We are loving and helping the least of these, please join us in this vision of God.