The unfailing love of Christ 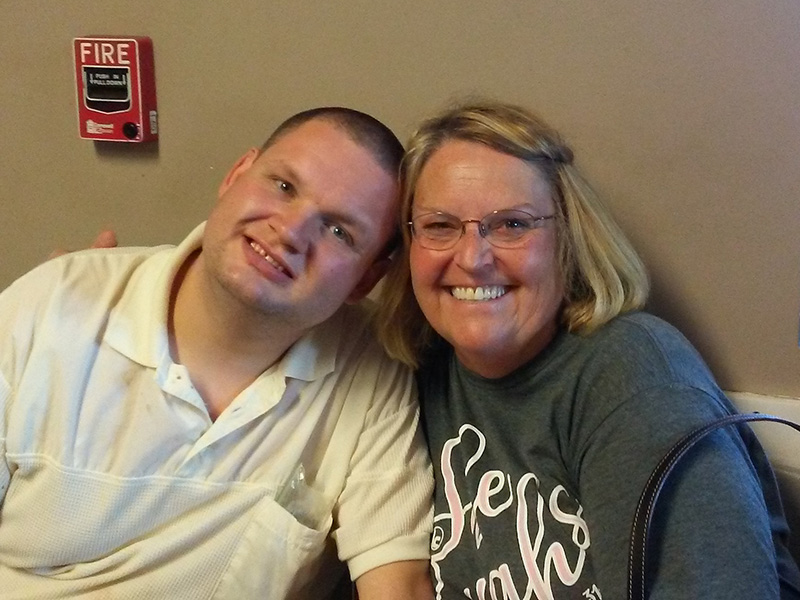 It was the middle of June 2018 and we were serving at Meet Me Under the Bridge (MMUTB) as we have done every Sunday for 13 years. An autistic young man, named Michael who we served regularly for four years walked up to a volunteer named Lori and announced, “I wanted to let you know that daddy died on Wednesday, I’m homeless now and I’m living at Wheeler Mission.” Lori stood in shock and watched him walk away…

Thus began a journey to try and get Michael some help. We (Lori & Kathy, volunteers) went to Wheeler Mission that week to talk with Michael and staff at Wheeler to figure out how to help him. Wheeler staff told us he wasn’t there. We were very confused and probably a little demanding with them as we were told he was there. We began searching for him. We went everywhere we thought he might be. We looked behind his house that they were evicted from after dad had died; we looked at Horizon House, camps, bridges, and library. We were unsuccessful but not deterred.

We searched for the next three weeks, until he once again appeared at Wheeler Mission. Meet Me Under the Bridge continued to visit Michael and worked with Wheeler Mission and Horizon House to help find the support he needed and to help him secure a permanent place to live.

This process took three months. Michael has a younger sister, Lisa, who also became homeless when her father died. During this time, we tried to find her to help her. Michael’s desire was that he and his sister could live together and we wanted to help facilitate that if at all possible.

Sometimes Michael would be gone from the mission for days at a time. We found out later that when Lisa had extra money, she would pick Michael up and they would go to a motel together, she missed her brother. When the money ran out, he’d be back at the mission so he wouldn’t be sleeping on the street with her as the streets are very dangerous. His sister loved him very much and didn’t want him on the streets.

In late September, Lori received a call from the mission that a group home was available for Michael and they came to meet with him, but he was once again missing from Wheeler. (The enemy was at work to derail this). We again, began praying and searching for Michael. A missing person report was filed. Four days after the report was filed, Lisa called Lori. Lisa wanted us to know that he was with her. We contacted the agencies involved in getting the group home placement for him.

The beautiful thing about Meet Me Under the Bridge ministries is that we do our best to love like Jesus. We do not judge the people we are called to serve, we just pour out the unconditional love of Jesus. Our friends love and respect us in return, because they see His Love.

The following week, Lori was in touch with the Lisa. It became apparent that Lisa was a drug addict. They were in a motel with her boyfriend, who was a convicted felon, drug abuser, and drug dealer. Adult Protective Services (APS) was involved and on September 27th, APS, Lori and the advocates for the group home went to the motel to remove Michael from a very dangerous situation.

The officer with APS continued telling us how dangerous the drug dealer was in the room. He had Lori and the advocates from the group home move away from the door and stand next to the wall outside the room. He had his hand on his revolver and banged on the door and announced “We are here to get Michael” and demanded that she send him out!! The door opened and the Michael saw Lori and he said, “Lori”, Michael then walked directly to her. His sister looked directly at Lori, even though she was high, the look of betrayal on her face said it all. What happened at the motel was nothing short of seeing the love of Jesus in action. 1 Corinthians 13:8 says, “Love never fails”.

We then took Michael to his new home, and his new life.

We are in awe having witnessed the beauty of God’s love rescuing Michael and also in providing a safe home for him. When he arrived at his new home, he had a room, with a new bed ready for him and a new wardrobe. He left the motel with only the clothes he was wearing. He has his first job ever, making his own money, good medical care, and friends! He weekly attends church with Lori and helps serve at Meet Me Under the Bridge once a month. When our friends come back to give back in helping serve… means the world to us!

If the story ended here, it would be a beautiful and miraculous story indeed, but GOD…

Lori made sure Michael was secure and felt comfortable in his new home. Lori and Kathy had a long talk and Lori shared her sorrow concerning Lisa. Kathy and Lori prayed. Lisa knew that everything that happened was because we loved Michael and that she would know where to come for help when she was ready. Because she knew we loved her too. Little did we know just how quickly God was going to move on her behalf.

The following day came this text, “why did you leave ME here?” Thus began a day of texting back and forth with her finally deciding she wanted to change her life and asked Lori to pick her up. We had been in touch with APS, they couldn’t get involved but continued to let us know how dangerous the dealer she was staying with was. Lori and another Meet Me Under The Bridge volunteer, who has a permit to carry a weapon, met her at a Dunkin Donuts near the motel.

Lori contacted the Reuben Engagement Center, a detox facility for the homeless in Indianapolis. Lisa was taken there and she cried the entire 30 minute drive downtown. She hadn’t used drugs for at least 12 hours and was going through major withdrawal. She was admitted at the Reuben Center on September 28, one day after her 27th birthday, and one day after the day her brother was taken to a group home.

Lisa was at the Reuben Center for 19 days. It wasn’t easy for her… not by a long shot!!! We found out her dealer/boyfriend/pimp had been giving her both meth and KD, a deadly synthetic marijuana substitute. She had this deadly addictive combo continuously given to her for months. The withdrawal symptoms were very difficult. Lori talked with her daily and encouraged her. She was not allowed any visitors.

The Rueben Engagement Center (REC) works with the homeless to provide long and short term rehabilitation services for the homeless addict. Meet Me Under the Bridge worked together with the REC to try to find the best rehab facility for Lisa. Lisa was insistent that she not stay in the downtown area, she knew every drug dealer downtown. When a facility in a county north of Indianapolis wouldn’t take her because they felt like they weren’t a good fit for her, she became very discouraged. MMUTB continued to support her. Her resource coordinator at the REC then decided to let Lori visit her and take her to her court appointments to help her not to give up.

Lisa shared with Lori intimate and horrifying things from her past. We found out that there was lots of childhood trauma; most of which was sexual and discovered that she had been a victim of human trafficking. It just so happens that the largest rehabilitation facility in the country for women who have been trafficked is in Indianapolis. Connections were made and God made a way for her to go to the program at Hope Center Indy. Hope Center is for girls/women sex trafficked. Praise God for this place of REFUGE!

Lisa is making incredible strides to wholeness and wellness in this God based program at The Hope Center. Lori is now her mentor and spends time with her weekly. She is also attending church with her brother! She has been drug free since September 28th and states it’s the longest she’s been clean for as long as she can remember! She said the longest since she was born with a laugh. It’s good to see her smile and hear her laugh and know that her heart is more at peace than it’s ever been since the trauma began at a very young age.

Relationship is the key!! Unconditional love is the key! Jesus is the KEY!!! He is the KEY to wholeness to be completely REDEEMED!! Jesus is the answer to the despair and hopelessness our friends feel. We strive to love our friends and to develop meaningful relationship with them every Sunday in a parking lot passing out hot food, the Word of God and the beautiful love of Jesus!

Lisa is now 64 days sober! She called Lori today and was literally beside herself with joy and excitement. She accepted Jesus fully last night. She is totally sold out to Jesus and is no longer the same person. She told Lori she is almost afraid of what else Jesus is going to do because His presence was so powerful last night. She doesn’t know how she can possibly deal with more of Him!! That’s’ our JESUS!!!

Please pray for God to heal the WHOLE person. Jesus left the 99 to help the one. Matthew 8:12 12 “What do you think? If a man owns a hundred sheep, and one of them wanders away, will he not leave the ninety-nine on the hills and go to look for the one that wandered off?

If you would like to financially support Meet Me Under The Bridge and our efforts to help our street friends, you can by the information below. Thank you for any consideration to help us with this work.

www.meetmeunderthebridge.org
On our donate page